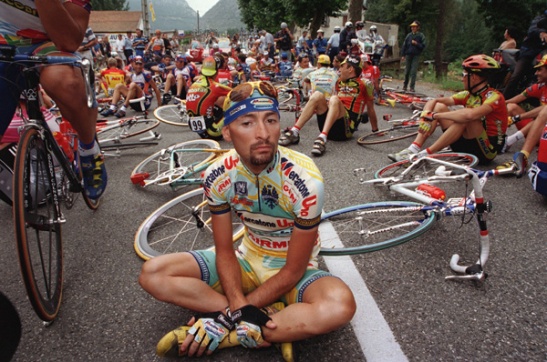 Marco Pantani, eventual winner of the 1998 Tour, sits in protest at the start of stage 12. Photo: Jacky Naegelen/Reuters

Cycling has always had a seamy underbelly. In the last few days hints of it have emerged from the depths in the pages of this blog. There is a common thread in Le Tour from Henri Pélissier’s “cocaine for the eyes and chloroform for gums”, Anquetil’s loaded question “You think you can race Bordeaux-Paris on mineral water?”, the death of Tom Simpson on Mont Ventoux, Michel Pollentier’s farcical attempt to foil the control, to the withdrawal of the entire PDM team in 1991 and beyond: Drugs, doping, or dopage as the French call it.

The first open drug tests were carried out in the 1966 Tour after France had passed a law making it illegal to take or prescribe any of a proscribed list of drugs with the aim of enhancing a rider’s performance. At Le Tour Raymond Poulidor was asked to provide a urine sample, which he did reluctantly. The following day the riders stopped after 5 kilometres of riding, dismounted and walked for 200 metres chanting ‘Merde‘ before remounting and continuing with the race. 32 years later the riders were protesting again and once more drugs were at the heart of the issue.

On 24 July 1998 as Le Tour prepared to roll out from the depart at Tarascon-sur-Ariège the mood in the peloton was ugly. Two weeks earlier on 8 July Willy Voet, soigneur to the Festina team and personal carer to Richard Virenque, had been stopped by French custom officials at the Franco-Belgian border. The routine search of his Fiat 500 discovered a boot full of pharmaceuticals, including over 400 phials of human growth hormones and testosterone based steroids, boxes of EPO, masking products, anti-hepatitis vaccines and quantities of syringes. French police took Voet into custody at Lille Police headquarters and a search of the Festina offices in Lyon discovered more drugs. Bruno Roussel, the Festina directeur sportif, dismissed it as a sick joke, insisting that Voet was not part of the team’s Tour personnel.

With Le Tour starting in Dublin French police waited until the race was back on home soil before taking any action against Festina. Meanwhile Voet had made a full confession to the French police confirming that he had been acting under the instruction of the team’s management and opening a window on a widespread doping programme. On July 15, Roussel and the team doctor, Eric Rijckaert, were arrested by French police at the end of stage 4 from Plouay to Cholet, while eight gendarmes searched the team’s hotel.

The following day Le Tour organizers announced that Roussel’s licence as a manager had been revoked and he was banned from Le Tour. Festina however, were allowed to continue in the race. In their turn Festina informed the French police that doping had been introduced with the improbable reason that the team sought to safeguard the riders health and that by monitoring and controlling the use of illegal substances under strict medical supervision the risks were lowered.

The Festina riders meanwhile continued to claim innocence but Roussel’s admission of systematic doping within the team left Le Tour little alternative. On 17 July race directeur Jean-Marie Leblanc expelled Festina from the race. Roussel and Rijckaert were charged with importing and circulating illegal substances and continued to be detained.

As Festina’s star rider, French housewives favourite Richard Virenque, left Le Tour in tears, challenging the organizers to investigate all 22 teams and protesting that he had never taken drugs in his life, attention quickly turned to the TVM Team when the newspaper Aujord’hui reported that earlier that year a team lorry had been stopped by customs in Reims and 104 ampoules of EPO had been impounded.

On July 23, Le Tour’s first rest day, the police pounced. Nine Festina riders and three officials were taken into custody, as were Cees Priem and Andrei Michalov, TVM’s manager and doctor. At the Hotel de Rocade in Palmiers the TVM riders were hauled from their rooms by police and detained until midnight. Corticoids and masking agents were discovered in their rooms.

Angered and shocked by what they regarded as brutal police treatment the peloton reacted the next day at the start of stage 12 from Tarascon-sur-Ariège to Le Cap d’Agde. At the depart the peloton refused to start, instead sitting down en masse. Eventually the race began, but under neutralised conditions as the peloton maintained an average speed of 14 kph for the first 16 kilometres. After 2 hours the day’s racing finally began at approximately 13:35. Ultimately it was Belgian sprinter, Tom Steels, who was to take the stage victory in a mass sprint.

Elsewhere five Festina riders had confessed to doping during police interviews, Alex Zülle, Armin Meier, Laurent Dufaux, Christophe Moreaux, and Laurent Dufaux. In Belgium a police search of the premises of the Festina doctor discovered evidence of the widespread use of EPO in the team. Zülle later discussed his experience and decision to confess in an interview:

“In the beginning the officials in Lyons were friendly. But on Thursday evening the horror show began. I was put in an isolation cell and had to strip naked. I had to give up my belt, shoes, even my glasses. They inspected every body cavity, including my rear end. The night was bad, the bed was dirty and it stank. The next morning they confronted me with the compromising documents they had found. They said that they were used to seeing hardened criminals in the chair I was sitting on. But is that what we are? I wanted out of this hellhole, so I confessed.”

“I’ve been in this business for a long time. I know what goes on. And not just me, everyone knows. The riders, the team leaders, the organizers, the officials, the journalists. As a rider you feel tied into this system. It’s like being on the highway. The law says there’s a speed limit of 65, but everyone is driving 70 or faster. Why should I be the one who obeys the speed limit? So I had two alternatives: either fit in and go along with the others or go back to being a house painter. And who in my situation would have done that? When you don’t tell the truth right away in this sort of situation, then it becomes more than a white lie. It’s not really a matter of your personal self-interest. On the Festina team we had a good team spirit, and nobody wants to wind up being the traitor. You stick together in a very, very difficult situation and you want to hold together as a group. And it’s not something that only concerns the riders making big money, you’re talking about family men who are making a living.”

We may feel sympathy for the way in which Zülle and his Festina team mates were treated by the French police. It must have been a traumatic experience. But can we excuse his actions? As the investigation gathered pace it emerged that not only were Festina’s riders part of a systematic doping programme but that they were all paying into an annual slush fund to buy performance enhancing substances. At the time of the 1998 Tour this fund was estimated to be some €60,000.

Le Tour itself juddered on. Another riders strike took place on stage 17. Rodolfo Massi, then the King of the Mountains leader, was arrested after his Casino team’s hotel was searched and corticoids, growth hormones, and steroids were discovered in Massi’s hotel room. They were needed, Massi explained, for his asthma. The authorities took a dim view of this feeble defence and charged him with selling banned drugs. By Paris several teams, including Once, Kelme, Vitalicio Seguros, and TVM, had withdrawn in protest. Marco Pantani, the diminutive Italian rider, was the overall victor following his emphatic win at Les Deux Alpes on stage 15 where he beat eventual second place overall, Jan Ullrich, by nearly 9 minutes.

Cycling’s dark underbelly had been exposed to the glare of publicity. The investigation into the Festina Affair revealed widespread systematic doping within the professional peloton and as time has passed more and more riders from that era of cycling have confessed including Richard Virenque who continued to maintain his innocence but finally confessed during the trial of Festina riders and team personnel at Lille, though maintaining that it had not been intentional.

The next year’s Tour was billed as the Tour of Renewal, a fresh start for a sport that had put its house in order. The success of the Texan, Lance Armstrong, in winning his first Tour after returning from life threatening cancer was the first in an astonishing run of 7 consecutive victories. Of course, we now know that each win was underpinned by the most thorough doping programme in the history of sport.

New tests for drugs, the biological passport scheme, and a commitment by teams and riders to ride clean all seek to convince us that we are now in a new era of drug free cycling. Yet the positive results continue, and we now know of micro-dosing, the ‘latest’ method of administering a drugs programme in a manner that makes it difficult to detect. And while sports bodies have primary responsibility for controlling doping it is public authorities that have uncovered the major doping scandals that have affected cycling and other sports. In October 2015 USADA will present its case against Lance Armstrong to the Court of Arbitration for Sport. Ironically cycling’s governing body, the UCI, may seek to stop USADA in a move to prevent any fallout from the allegations that the UCI accepted payments from Armstrong and broke their own rules by accepting a backdated therapeutic use exemption after Armstrong tested positive for cortisone on four separate occasions in 1999.

Equally telling of the cycling world’s inconsistency towards doping was the appearance of Johann Bruyneel, Armstrong’s manager at US Postal and Discovery, at Bradley Wiggins successful World Hour Record attempt on 7 June 2015. Bruyneel it should be remembered is currently serving a 10 year ban from professional sport handed down by the American Arbitration Association as punishment for his participation “at the apex of a conspiracy to commit widespread doping on the USPS and Discovery Channel teams spanning many years and many riders.” Bruyneel may have been attending the Lee Valley Velodrome as a private individual but his cosying up to former UCI president Pat McQuaid, the man who is accused of protecting Armstrong, leaves a sour taste. And then there’s Festina’s latest advertising campaign starring none other than, Richard Virenque! It seems that the timepiece manufacturing company’s “true passion for sport” doesn’t include any sense of shame about the sordid doping scandal, nor for the deceit and outright lies of Virenque.