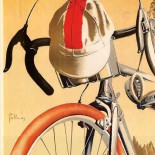 It’s January, which for cyclists residing above 45º North means it’s likely to be either raining, cold, foggy, snowing, cold, dark, sleeting, cold, or any combination of these. If you live in Britain like me you’re unlikely to see blue sky for at least three whole months. In a nutshell it’s not great weather for cycling. As an alternative to going out on the bike you could spend hours on a home trainer dripping sweat onto your frame and the carpet while watching a box set in a futile attempt to counter the mind numbing boredom of stationary cycling.

Or, you could get your cycling fix in a more enjoyable, if less physically beneficial, manner by playing cycling board games instead. Rather than cold extremities, a dripping nose, constant grumbles about the manufacturer’s definition of ‘waterproof’ compared to the reality, and constantly damp clothing, you could be inside in the warm enjoying your ‘mid ride’ coffee and cake whilst engaging in dice based competition with like minded friends.

Cycling board games have a long history which coincides with the mass popularity of the bicycle itself in the last decade of the Nineteenth Century. Game play varied but two examples from 1896 and 1900 provide a flavour of the fun to be had. The latter game is the simpler of the two. In effect being a version of the perennial children’s favourite, Snakes and Ladders, with a series of illustrated squares and circles inside of which the player would encounter rewards or forfeits in the form of an instruction to go forwards and backwards. 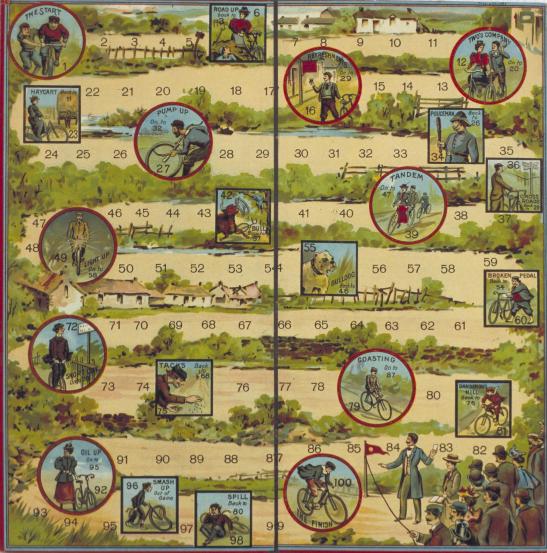 Cycle board game, circa 1900. © Victoria and Albert Museum, London.

The earlier game, Wheeling, a race from Hyde Park Corner, London, to The Anchor Inn in Ripley, Surrey, offered somewhat greater complexity in gameplay. Players would move their game counters as per the total of two dice. Progression around the board was hampered by special squares that required the player to ‘walk’ by restricting them to one die only. Other squares allowed players to collect a number of items that included a lamp, a bell, a whistle, and a pneumatic outfit. If players did not have these items in their possession they would suffer a forfeit when landing on specific game squares. For example if a player came upon the policeman at game square 82 without a lamp in their possession they were compelled to ‘walk’ the remainder of the course, a further 18 squares or at best three lucky throws of six on three consecutive turns. 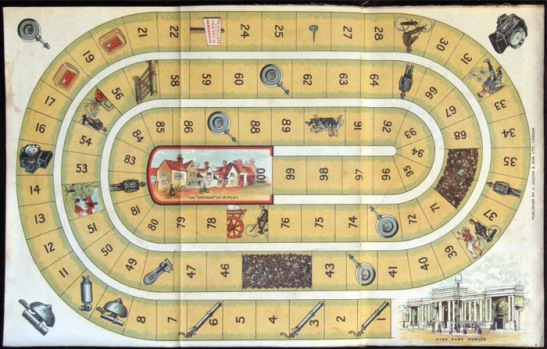 While using cycling as a theme and relating reward and forfeit to the experiences cyclists might have in real life, these games and others like them are basically variants of board games such as ludo and parcheesi. Replace the bicyclist with a motorist or an equestrian and include appropriate obstacles and equipment and the game format serves equally well for a race between cars or horses. Over the years there have been hundreds of such games released, with one of the most visually appealing being the 1950 Spanish game, Vuelta Ciclista a España, with its three dimensional mountains. 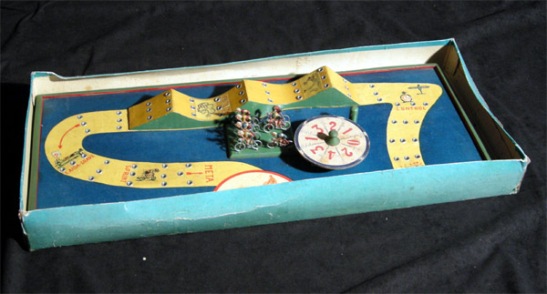 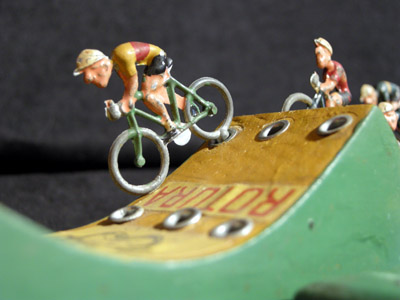 More complex cycling board games include elements that reflect distinctive features of cycling. For example a stage race game might include a time-trial, different types of terrain on stages, and a classification scheme to determine the overall winner. Games may also introduce team dynamics, perhaps by requiring that a team includes specialist riders or by using a set of characteristics that will determine an individual team members abilities. Many modern games also eschew the use of a single game board, instead using sections or tiles with which the players can build a race route as typified by one of the most recent entries into the market, the 2014 game, Cycling Party. 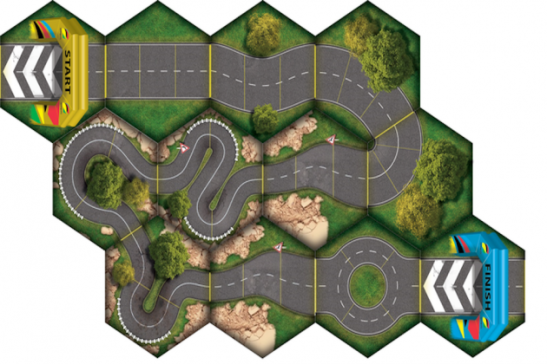 The makers of Cycling Party bill it as ‘the most realistic cycling game board game’. The fact that its rulebook runs to thirty-seven pages whilst the rules for Le Tour de France itself only fill thirteen pages would seem to confirm that their boast is largely true. The game mechanics allow for different actions and levels of difficulty on flat terrain and in low, medium, and high mountains that include five categories of mountain pass. Teams are made up of a climber, a sprinter, a rouleur, a flat domestique and a mountain domestique, with an option to add a sixth team member in the form of a lanterne rouge. Each type of rider other than the lowly lanterne rouge has special moves or characteristics that come into play on their preferred terrain. Players may choose to play the game as a one-day race or a stage race, with the latter being potentially so complex that the manufacturer’s have supplied online software to help set up the stages, keep track of developments, and manage the game. 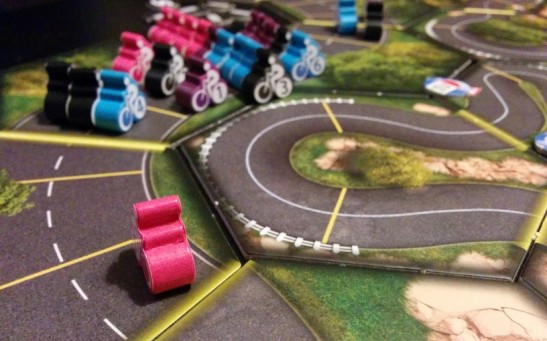 In addition to vintage and contemporary games that can be purchased there are a number of print and play games available for download. These range from simple dice games to more complex games that emulate stage racing. The rules of Donato Pompei’s game, Il Giocco del Giro, are reminiscent of the Wheeling game, though it is based on a 1937 Le Tour game published by L’Auto. 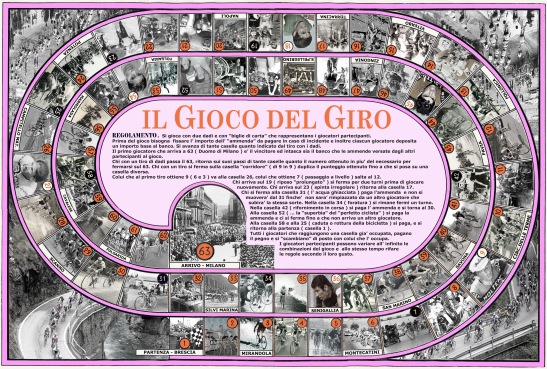 The game board for Il Giocco del Giro. Photograph: http://www.cyclingboardgames.net

The gameboard is available to download from Anki Toner’s online cycling board game museum, cyclingboardgames.net, As well as the board the download comes with a stellar array of cyclists to use as player counters.

Those seeking a more complex game are well served by Luke Morris’ ‘Tour’, another print and play game available to download from cyclingboardgames.net. It offers player profiles, team dynamics, special abilities and a set of game tiles to build race courses. 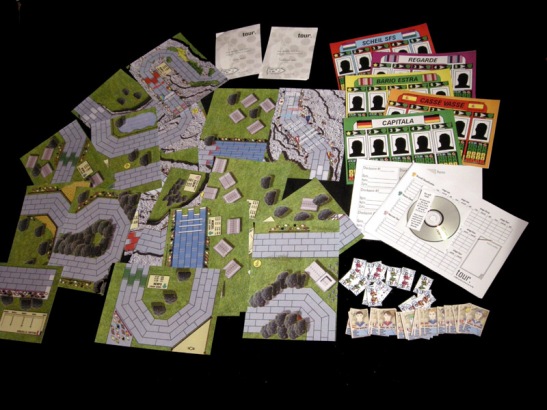 What you get when you download Luke Morris’s ‘Tour’. Photograph: http://www.cyclingboardgames.net

What’s more, both these games are free to download. The only cost to you is some colour printing, paper, card, and glue, and the time required to put the components together. A small price to pay for some fun with friends or family on a miserable Winter’s day when as much as you might tell yourself you really, really should go for a ride the appeal of staying warm and dry comes up trumps … speaking of which Hinault’s ‘toughness score’ is 17 points too low if you ask me! 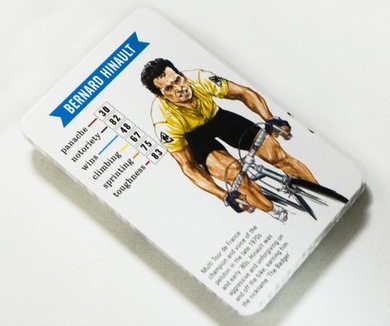 If you’d like to learn more about cycling games there are two very good websites that are devoted to the genre.

The first is Anki Toner’s Cycling Board Games which offers an online museum of cycling related games with information on hundreds of games and their rules, free games, advice on developing your own cycling games, and a very interesting essay on cycling games theory.

The second is Ludo’s Wielerspellen which offers excellent reviews of an ever growing collection of cycling games. Ludo and his fellow cycling game fans also develop their own rules, gaming pieces, and play games based on real races. I’m particularly impressed by Ludo’s hexagonal game tiles and the attention to detail in the games they create.

Cyclist’s enter a cobbled section during a game based on the Eneco Tour © Ludo’s Wielerspellen, 2015

4 comments on “Cycling Board Games”