In February 2015 the organizers of the E3 Harelbeke race in Belgium courted controversy when they released an online advertisement for their upcoming event. In a reference to Peter Sagan pinching the bottom of podium girl Maja Leye in the 2013 edition of the Tour of Flanders, the poster shows a gloved hand reaching for the knicker clad derriére of a woman with the accompanying caption “Who will ‘squeeze’ them in Harelbeke?”

The organizer’s of Harelbeke have previous form, notably with their 2011 advert which featured Playboy model Gaëlle Garcia Diaz lying naked in a field. Reaction was understandably critical with open condemnation from social media, mainstream press, and the UCI, which declared itself “extremely unhappy” and “reminded the organiser of its responsibility and the UCI Regulations”. The Belgian Jury of Advertising Ethics (JEP) described the poster as “disparaging and disrespectful towards women”, adding that it “exploits the woman as an object of desire”. The organizer’s have now pulled the poster from their online communication platforms. While bowing to public pressure they have arguably raised the profile of the race with more people, particularly those not normally interested in cycle sport, now aware of it.

Sex sells after all, and cycling advertising is no different. Early adverts regularly featured scantily dressed women in varying states of déshabillé that were largely impractical for the activity they were supposed to be engaged in. 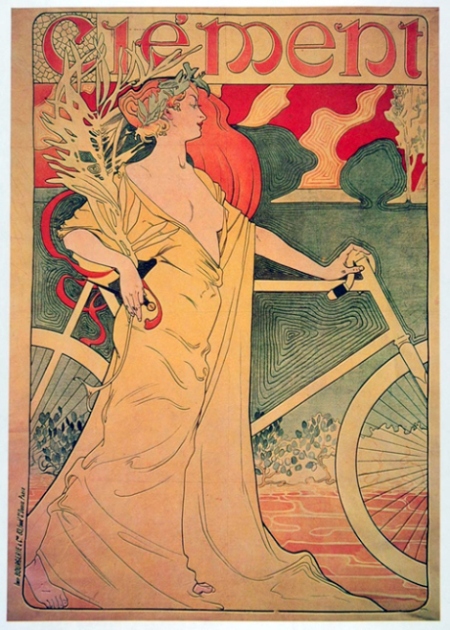 An advert for Liberator cycles, 1899

Such adverts may have referenced classical depictions of the nude female form but were clearly designed to appeal to male rather than female sensibilities.

The first half of the Twentieth century generally saw a move away from nude figures and the overt sexualization of women in bicycle advertising. The more liberal 1960’s heralded a change in which even the usually conservative British manufacturer, Raleigh, used a nude to sell its wares, at least in Greece. The advert is notable in that its subject has no association whatsoever with the product being sold. Unless of course the message was that riding a Raleigh would require women to make needlework repairs to their underwear, which hardly seems a successful selling point.

Most adverts did of course feature the product they were selling. Typically the woman was little more than an accessory, an object of titillation placed to attract attention from a male audience.

Particularly gratuitous are the advertisements masquerading as photo shoots in Men’s magazines such as the one featured in Sharp with model Alice Rausch, ostensibly a piece on 5 high-end bikes from Cannondale, Felt, and Cervelo. 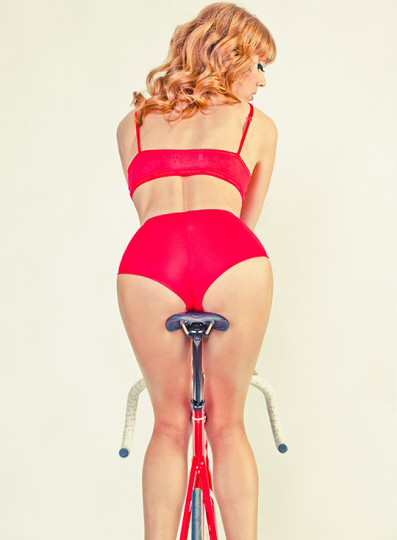 It’s a Cervelo bicycle in case you were wondering. Photo, Trevor Brady 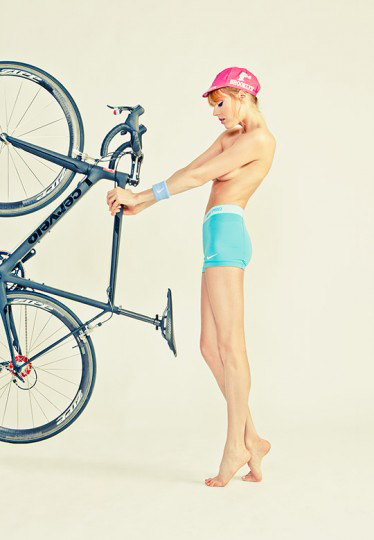 This one manages to get Nike and the Brooklyn Cycling Cap in as well. Photo, Trevor Brady

Admittedly this photo shoot was published in an online magazine aimed fairly and squarely at a heterosexual male audience, which may or may not justify focusing on a semi-nude woman to flog merchandise. Curiously advertising companies also seem to think that the same approach appeals to women cyclists. Take for example this 2013 advert from Assos, manufacturer of high performance cycling clothing aimed at the cycle sport rather than the leisure cycling market.

The question has to be, who is this advert aimed at? The absence of a bicycle, the skin tight shiny black trousers, the killer heels, and the coquettish, kneeling come-hither pose suggests that it isn’t aimed at women who are interested in achieving a PB in a 25 mile time-trial or are training for an Alpine sportive. By comparison the first image you’re presented with on the Assos website is one for a men’s jersey. Note that the square-on standing pose adopted by the model is one of just two used for every item of men’s apparel on the site. 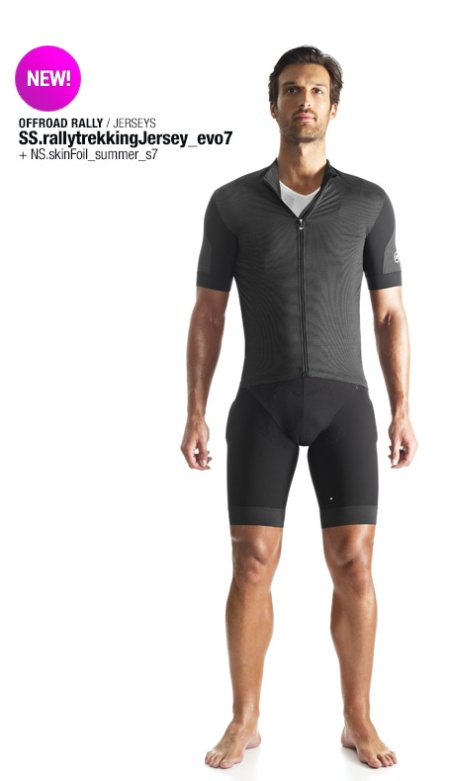 The first women’s item of clothing you’re presented with on the homepage slideshow are a pair of shorts, the first of many images on the site featuring the same model. Unlike the pictures for men’s clothing the female model is shown striking a variety of poses more reminiscent of glamour photography. Presumably the fact that Assos don’t offer a women’s specific undervest explains why the model is topless. 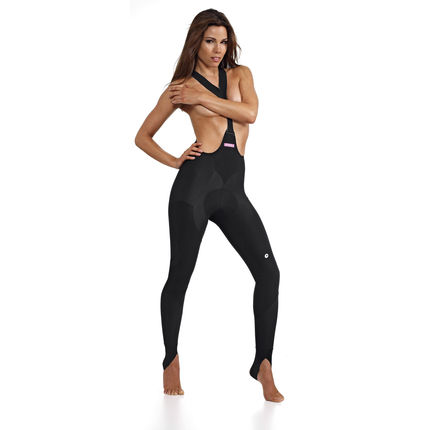 While other leading cycling clothing manufacturers such as Giordana, Castelli, and Santini did use similar images to advertise their wares in recent years there appears to have been a change of approach. Their websites now predominately feature images of the clothing only, and where women are depicted they are shown engaged in cycling, appropriately dressed for the occasion. Assos seems to be the only company that still persists in depicting women in this manner in its advertising. While the men’s advertising focuses on the product, the women’s focuses on the female form presenting the model, rather than the clothing, as an object of desire. Where the men’s advertising emphasises the functionality of the clothing for its intended purpose, the women’s advertising suggests that the wearer will still be sexually alluring even when wearing lycra.

Is it sexist? Clearly so, yet all is not quite as black and white as it seems. Context is everything and when women use similar imagery to market their products can we also describe that as sexist, or is it a feminist re-appropriation of the female form? Christina Guzman’s Urbanist range of women’s padded underwear is a prime example with the images used to promote her clothing having little to differentiate them from the overtly sexualized photographs used elsewhere. The ‘Bettie’ is a case in point. Designed to be worn under shorts, trousers or a skirt they are described by Urbanista as being “for the ladies that want to feel a little sexier while they ride.”

In terms of composition and content the Urbanist image has little in difference to the Laurent Cycles advert or the photograph of Alice Rausch in Sharp. All three present us with a rear view of a young woman in her underwear seated on a bicycle. Yet while objectively the same, subjectively they convey very different messages to their intended audience. The women in the Laurent Cycles advertisement and the Sharp photoshoot have nothing to do with the actual product being presented, the bicycle. They are mere window dressing calculated to engage male interest. The ‘Bettie’ advertising on the other hand portrays the product being sold, in use by a representative of the target market. It is a fine line however. As an undergarment the ‘Bettie’ is presumably not intended to be worn in this manner in public. Urbanist could have opted for an image of a fully clothed woman riding a bicycle together with photos of the product on a mannequin. By choosing an image that undoubtedly has sexual overtones are Urbanist complicit with the more explicit objectification of women that exists elsewhere in advertising?

And what do we make of those successful female cyclists who choose to participate in photo shoots for Men’s magazines and sports calendars? Women such as Victoria Pendleton achieved success in the highest echelons of cycle sport through their drive, commitment, and sheer hard work. Does their participation in what is in effect glamour modelling undermine their achievements by reducing them to objects of desire? Or are they empowered by their success to celebrate their femininity on terms that are their own? Pendleton herself seems to think so when she said, ” I genuinely enjoy a good dress-up and always have done.” The Daily Mail headline accompanying their piece on this photograph is perhaps more telling, “Olympic cyclist Victoria Pendleton gets her priorities straight as she poses for sexy new photoshoot.” Being sexy presumably seen as more important than winning 25 National Titles, 8 World Titles, and Commonwealth and Olympic Gold Medals.

On 9 March 2015 the Cycling Independent Reform Commission (CIRC) presented its report on doping in professional cycling to the UCI. Much press attention has been given to the systematic cheating within the sport and the failures of the UCI to adequately address the issue. This is a timely reminder to the sport that much work needs to be done if it is ever to eradicate doping and the press are right to highlight the issue as they have. Yet in all the furore another more heinous matter raised in the report has been largely overlooked. In the scant few paragraphs the CIRC devoted to women’s road cycling in their 227 page report a single sentence refers to the alleged sexual exploitation of women riders.

Cycling has long been dogged with a reputation of sexism and Sagan’s sexual harassment of Maja Leye and the woefully misjudged advert for this year’s Harelbeke serve only to demonstrate that it’s business as usual in the peloton. The UCI was right to strongly criticize the organizers of the race and their intervention arguably forced their change of mind. Yet if they are to maintain the moral high ground they must thoroughly investigate the alleged sexual exploitation alluded to by CIRC and take swift action to deal with it effectively. The rest of us should think twice when we encounter the overt sexualization of women in cycling advertising and send out the message that it is no longer acceptable.

Don’t ride where you drive